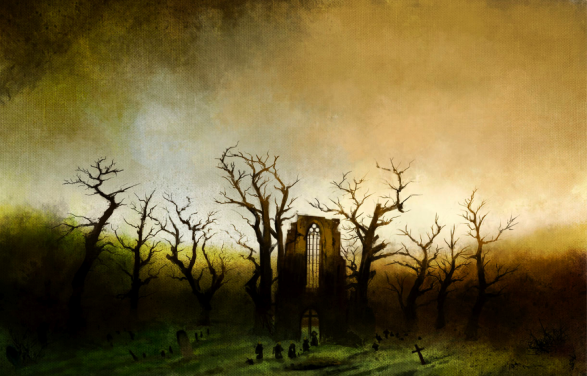 When I started writing this in May, I knew I wanted a star vampire to be at the core of the conspiracy. Latching it to the Tunguska event, I had the means of arrival and declared it a spore with a fungus like ability to reproduce. I stayed pretty vague on the rest of the details as they were not required at the time. Now that the players have gathered information from the research binders they started looking more closely at the Tunguska event; it became self-evident that a prologue was the best answer. In my opinion it will give depth to the story and shed light on the organism itself. That being said, it also means that the Colonist must be better defined if we want a proper investigation type story. So here it is.

What happens to an ecology, when the parasite level reaches critical mass? The ecology dies.
— Hugh MacLeod, How To Be Creative

The vampire in the Shoot at the Stars campaign is a fungus like entity that arrived through the Tunguska incident in 1908. The fungus is a parasite that migrates from star to star colonizing any ecology that it encounters, once the entire ecology is subverted, it becomes dormant for until a catastrophic event, planet collision, or even attempt by the inhabitants to send it out to space, enables it to reach the next stars. The organism is so simple that it can survive in most environment in its dried state, and will return to it when exposed to danger. When dried the organism looks like a white gray powder that could easily be mistaken for Anthrax.

Einstein’s math was sound, faster-than-light travel is not possible. Unknowingly for the human race, this little tidbit of math is what protects it from most of the dangers of the universe.  The problem is that Darwin was also right. The organism known as the spore is a product of the adaptation trait, on a distant planet near a dying star. In the final days, before the star collapsed, the organisms living on the planet discovered a way to encode their unique DNA on hyper resistant spores that could travel the stars on the remnants of their planet. The dormant spore travels the void using meteors. In addition to the alien DNA the spore contain a really simple bio software algorithm that triggers when entering a new biosphere. The algorithm steps are really simple to ensure a maximum percentage of success. When connecting to the new biome, the spore begin establishing a bridgehead by mimicking the most simple organism it can find in the new locale. Afterwards it follows the evolution path to learn about the local biome DNAs, it then uses a high level organism from the host planet to act as scaffolding for its own DNA. To build this scaffolding, the organism harvest from local source and rebuilds the host completely by using available parts. This is where the colonization system can fail. Landing in a remote part of a world often means that the spore needs to lay dormant for a long time before being able to latch on a new organism. It’s parasitic nature also prevents it from colonizing barren worlds. Once the scaffolding material has been harvested, the spore enter the second phase of their programming. The graft the alien DNA to the protein base, allowing the parasitic organism to be reconstructed completely from local stem material.

Historical sources tell us that the first expedition to the region of Tunguska following the fall of the meteor did not occur till 1921. What they fail to tell us is that the 1921 expedition lead by mineralogist Leonid Kulik is the first public recorded expedition. There was another one in 1909, lead by a geologist from the St-Petersburg Academy of Sciences. The record of which are currently unknowingly sealed in the Smolny Institute extensive historical library. The log was written by a journalist part of the expedition and was seized by the Cheka along with samples from the region in 1921.

Following our survey of the Tunguska region we investigated the possible presence of meteoric iron in a region just a couple of kilometers north. On the order of the expedition team leader, we used our remaining resources, equipped our dog sled and started our 3 weeks trip. Most of us were tired but happy, knowing that after this final trip we could finally go home to our loved ones.